Alina Pash is the main discovery of the year and breakthrough on the Ukrainian music scene.

Alina Pash is the main discovery of the year and breakthrough on the Ukrainian music scene. The unique style of the singer is a mix of electronic music, hip-hop, pop music and ethnic.

In April 2018, Alina Pash presented the debut video/single “Bitanga”, which is translated from Ruthenian dialect as “hooligan”. The video was filmed in Transcarpathia — in singer’s native village. The release went viral and became incredibly popular in just a few days. Alina received several awards for this track at the Jagermeister Indie Awards and got into all top Ukrainian music and fashion media. 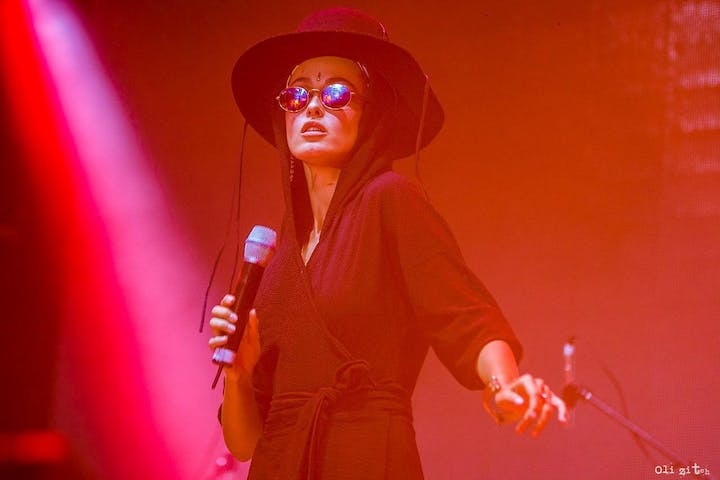 In September 2018, Alina Pash released the second video for the single “Oinagori”. The track was made by the Parisian sound producer MiM, combining dance hardcore with hip-hop and flamenco guitar. Alina rapped with stylish autotune and lyrics referenced to the famous Ukrainian folk song «oy na gori dva dubky». The video was shot in Marseille by the directorial duo of Lou Escobar and Nathan Daisy.

Following the success of “Bitanga”, Alina Pash became the most demanded new artist at various Summer festivals. The live show of the singer is distinguished by tons of colorful images. Alina cooperates on an ongoing basis with influential Ukrainian stylist Valery Topal. He considers Alina to be his muse and carefully builds her exotic, unique style.

Ukrainian glossy magazines call Alina a „style icon“ for the new generation. In addition to the successful career in Ukraine, Alina often travels on tour with the French group dOP. Club audience loves her. Alina has extensive experience performing in Ibiza, Paris, Berlin, Corsica. Together with dOP she starred for the trendy video project “Cercle”.

Alina Pash is actively supported by Ukrainian artists who have achieved world success. Among them are techno DJ Nastia and the band DakhaBrakha.

For the first time in PANDA!